Gujarat Tourism : The Most Handy Guidebook You’ll Get! 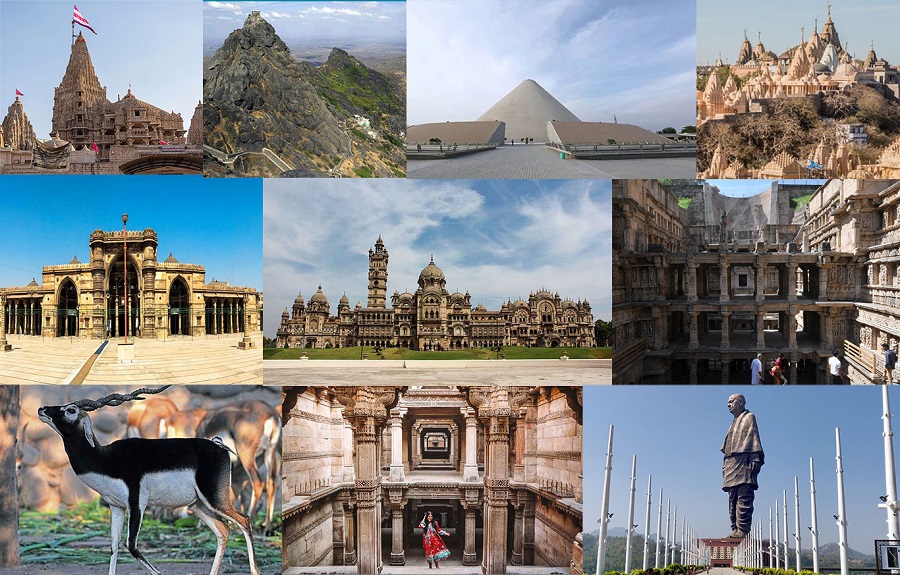 Heritage, folklore, culture, and traditions conjure up a paradise for tourists in the state of Gujarat. Gujarat Tourism is a thriving industry in the state that has almost everything to offer to a tourist right from historical grandeur to religious ethos to wildlife heritage. The natural beauty and landscapes in the state are remarkably diverse and thus utterly enticing for tourists. Exploring Gujarat is an experience in itself. If you have Gujarat Tourism plans in mind, this following Gujarat tourist guide is likely to help you. Read on to learn more-

The history of Gujarat dates back to the period of 1000 to 750 BC. The historical evidences of trade and commerce are clearly found. Gujarat was ruled by Aryan, Greeks, Guptas and Solankis.

In the 9th century, the state witnessed the rise of the Muslims. Then the rules of Mughals continued for two centuries and was ended by the Marathas in the 18th century. The British Raj achieved a toehold in the area in 1803. That was the time when the first British outpost took place at Surat.

How to Reach Gujarat

Gujarat can be reached by means of air transport, rail transport, and road transport.

Flights for Gujarat are available from different parts/cities of the country. The state houses domestic airports precisely 10 airports in number which is why traveling to Gujarat by the airway is not much of an issue. Traveling to Gujarat from different corners of the globe is also not a problem as well as Gujarat has an international airport at the Ahmadabad city. The domestic airlines functioning out of the state are GoAir, Spicejet, Kingfisher airlines etc while the international ones are Indian Airlines, Jet Airways, Air Sahara, Air Malaysia, Air India etc.

The rail network in the state is strong enough. Trains regularly run between major cities like New Delhi and Mumbai. Also, major cities within the state such as Surat, Ahmadabad, and Vadodara are linked to all other cities of Gujarat through strong broad gauge railway network.

The state boasts of a robust road network and it is indeed much better when compared to the other states of the country. 78, 397kms is the net road length that the state houses. Out of that total length 1572kms comprises the various National Highways. GSTC and many other private transport services operate buses across all the major cities regularly and frequently. Also, inter-state bus services connect Gujarat to various cities of the neighboring states such as Madhya Pradesh, Rajasthan, and Maharashtra etc.

Related: 7 The Best Places to Visit In Nagaland For A Blissful Vacay

Saputara, Kankaria Lake, Rann of Kutch, Porbandar beach are some of the major tourist attractions of Gujarat Tourism steeped in natural beauty.

What to shop in Gujarat

Rich handloom, handicrafts, and textiles are a tradition that the state of Gujarat Tourism boasts of. When at Gujarat you can pick the following items as souvenirs for your loved ones- patola sarees, bandhani dress materials and ghagra-cholis, lacquer furniture, appliqué quilts, embroidered footwear, gorgeous marriage attires, wall hangings, cloth toys and cradle cloths.

Unlike other Indian cuisine, Gujarati cuisine boasts of a harmonious blending of sweet and salty. Almost vegetarian, the popular Gujarati delicacies are Khaman Dhokla, Paunk, Kadi, Undhyoo and Shrikhand.

Where to stay in Gujarat

Gujarat has myriad options to put up. Right from Luxury hotels to medium range hotels to budget hotels, Gujarat can accommodate almost every type of tourist. Some of the top hotels in the state are Cambey sapphire, Novotel, Four points, Shanku’s water park and resort etc.

What is The QuickBooks Tool Hub

The Most Innovative New Tools for Electricians in 2022

The Best of Argentina: 10 Reasons Why It’s The Single Greatest Place...